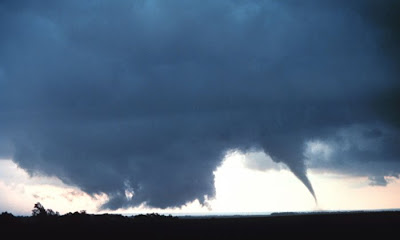 My hubby, son, Bruno and I spent some time huddling in the basement hiding from a potential tornado. For a couple of hours we watched the wall cloud, which was about 15 miles from our house spawn funnels. They dropped down and pulled back up over and over again. Several times there were multiple funnels dropping from the cloud. The rain and hail would fall so hard they would disappear, though we knew they were still there.
When we thought it was over, Ben and Steve headed out into the back yard to check things out. Bruno and I lagged behind (I was cleaning up) when the guys came running back in. As soon as they got out in the yard and were able to see around the house they spotted a funnel and started running.
We had lots of warning and actually kept electricity during the worst part of the storm so we could follow the radar and watch the supercell move and track the tornado signatures. I'm buying a battery operated TV today. Without the television coverage, we would have been so much more in the dark about what was happening.
There was damage nearby and a larger tornado that hit farther away in Reading, KS and then yesterday the giant tornado in Joplin and Minneapolis. We heard about the Minneapolis tornado on the radio and immediately called our younger son who was in that area.
The fury of nature is so random. One house untouched and others gone. My heart aches for those families in Joplin. Such devastation.
I hugged my guys a little tighter this weekend.
Back to quilts soon.
Posted by jacquie at 5/23/2011 07:16:00 AM

Glad to hear you and your family are OK. Stay safe.

Happy to hear everyone is ok! Stay safe.

It's been a tough weekend for everyone! I got up this morning to the news of the tornado that hit Joplin! Living in the Midwest you get used to all the tornado warnings and you take for granted the damage that those tornadoes can do and that the path can come your way! My thoughts and prayers are with those that have suffered from the recent devastations.

Wow! Those storms were so devasting and my heart goes out to all those people who lost everything. So glad that you and your family are all safe and together! In the end I guess that's all that matters.

Glad you are safe. Thoughts and prayers are with the people of Joplin. This has been a very rough tornado season for the Midwest and South.

So glad all is a-okay for your home and family! Nature has not been kind this year - so sad for those who've been directly affected!!

Mother Nature is so random. A few years ago hurricanes were marching through our area and so many people criticized our choice to live by the ocean. The thing is that the Mississippi floods, there are huge snowstorms, earthquakes, tornadoes, drought, and other natural diasters that there is no place that is without risk. We just have to help those who fall in the path of rage.

I'm glad you're ok. I've decided I hate tornadoes (I live in AL.) My thoughts are with you and those of neighboring cities/counties.

Oh Jacquie! It's so scary, isn't it? Raleigh is still recovering from devastating tornados over a month ago. It is so random - so strange to see one house fine and the one right next to it in splinters. I'm so glad to hear you guys are safe. Stay that way!!

Glad you are safe Jacquie! It is heartbreaking for others and really makes us count our blessings. Here in Idaho, we don't have much of this kind of thing happen 'knock on wood'.

So glad you and yours came safely through. Thinking of so many who did not this morning. Please give those little ones another squeeze, you don't have to tell them it's from someone they don't know.

Wow. Awe inspiring and terrifying all at once. Do I see a funnel quilt in your future? Glad you're all okay.

We lucked out here in Shawnee and the worst of the storms went above and below us. So glad your family is safe!

Glad you are all safe...it certainly had been a wild spring for weather. We rely on our NOAA radio a lot during storms (especially to wake us up!)

Your post just brought back all my memories of living in Oklahoma until fourth grade, and then going to college and living in western Kansas when I got married. And we didn't have a basement so we always had to go to a kind neighbor's house. So glad you are okay, and prayers going out to those who are suffering the devastation.

My heart goes out to all those peiople in your area affected by these storms. We have been watching them for rain potential becuase all that water has to come past my house at some point in the Mississippi River!

Glad you are safe!

So glad you all are safe. I am from Kentucky and have been through this in the past although this year we seem to be lucky enough that everything has gone North and South of us so far although severe weather is forcast for tonight and tomorrow. Hug your family close. Hope

Glad to hear you are ok. I spent yesterday thinking about all my friends who live along that weather front, so I'm relieved when I hear they are fine. I lived in western Missouri for several years and developed a train-wreck-kind of fascination with tornadoes. Hope today's weather is better.

Glad you all are safe! I know what you mean about tornados taking one house but not another. Where I'm building a house an EF4 or 5 went through the area (North Alabama) in that rash of April 27th storms. My future neighborhood had lots of damage to the houses but the corner of the cul-de-sac where my house will be was virtually untouched. The houses across the street from the subdivision are completely gone. You just never know where your luck will fall with tornados.

i am so glad you are ok! i have a friend in kansas that i was really worried about, luckily they were spared!

Oh my goodness! I am glad to hear you are all ok. Wow.

I am glad to hear you and your family are safe and ok.

The personal reflection makes these tornadoes much more real. I'm glad you are all ok. My heart is sad for those who did not fair as well.

So glad you're safe. How scarey!

That is a terrifying photo. I happy you are all safe, and saddened by those who lost so much this spring to the fury of nature.

Glad you are ok!

Wow, what a picture, Jacquie! My kids were in the basement in Topeka, as well. A tornado hit just blocks from them....so glad that you are okay!

How terrifying...so glad you're all safe!

Glad to know you are safe, but sad to hear of the death and devastation. Stay safe!

How frightening. Thank goodness you are all okay, and my heart goes out to those who were not as fortunate. xo

Jacquie, we thank God that you are safe, that His hand was around you as a shield about you.
Our hearts go out to so many others!
Peace!

So glad your family is okay! How frightening. We've been horrified to hear about the tragic tornados that have been ripping through parts of the USA. Heartbreaking.

I'm so glad to hear that you are all right. When one reads someone's blog for such a long time, it seems like we are friends if not family and so we worry.

Glad you are all safe...so scary!

I"m so glad you're okay! got a facebook update from my aunt in KC so they're good.

it scares the poop outta me. really. I really REALLY hate twisters! and TX does not have basements.

Glad you are safe Jacquie.
Living in Australia we don't have tornadoes. We do have tropical cyclones up north and earlier this year one created havoc.
I can't imagine seeing so many of these happening so close to your home.
My heart goes out to all those people affected in Joplin and other towns and cities that have been touched by these storms.
All best wishes
Alison (alioop)

I was thinking of you in that tornado belt when those storms rolled through -- glad you + family are OK. Stay dry!

Jacquie, I am so happy you and your family are ok. You guys in the KCMQG have been on my mind and in my prayers.We watch the storms form down here in West Texas (we don't get a drop of the rain, just the wind to fan the wild fire flames) then see the destruction they leave in their wake. Nature is a scary lady.

My goodness I am so thankful you are OK and your husband and son! My neighbor just went to Joplin to take photos and he said it was just terrible and not only what you can see with your eyes but smell. I am thankful for the safety of my family and my friends,,,we are so lucky and don't even know it alot of the time. Thank you for sharing.

Great photo. I love the green grass and the feeling that the prairie goes on forever. I've been up there three times in the last year.