My Day With the Devil...aka Rock Star Mama!

It's good to know a rock star! My sons got us VIP passes for the Mayham Festival in Indianapolis on Sunday so we drove down from Chicago to see The Devil Wears Prada in concert at the festival...from the side of the stage, no less. I have to tell you it was pretty cool. Ever the proud mom, I took hundreds of pictures of my boys and the rest of the band. It was amazing and I can tell you even in 100 degree weather those guys put on a show! 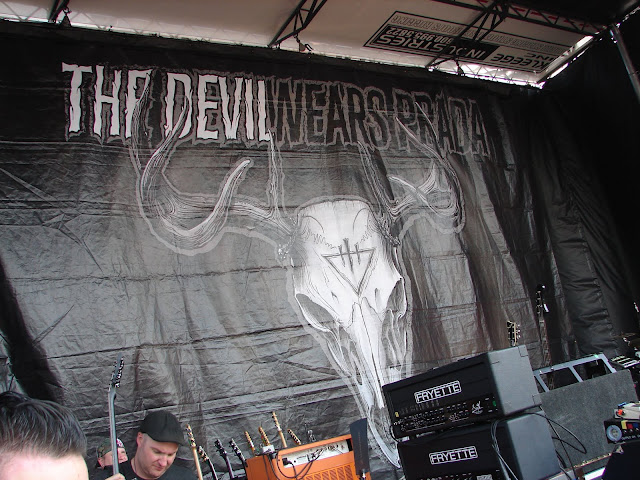 We spent an hour on the air conditioned bus with the band before the show.  Nice bus.  Ben has a bottom bunk (looks a bit like a coffin to me), but makes it really easy to roll out of bed in the morning.  Jon has a middle bunk...not too high, not too low...juuuuust right!

Before the show the guys got dressed and went outside to the tent to get their ears on. (in ear monitors, that is.) 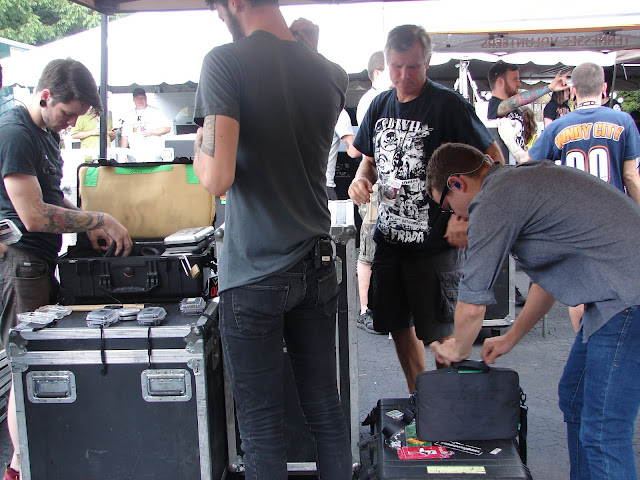 There was a little stretching and warming up.  You should have seen Dan, the drummer warm up...pretty awesome. 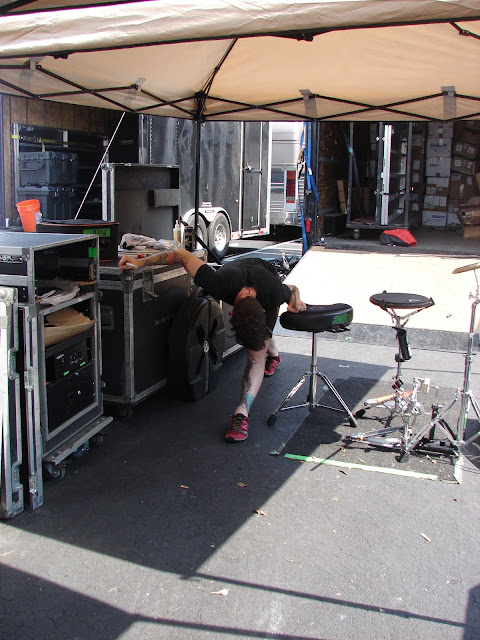 Jeremy installed a mini cam on the end of Andy's bass.  Can't wait to see that video! 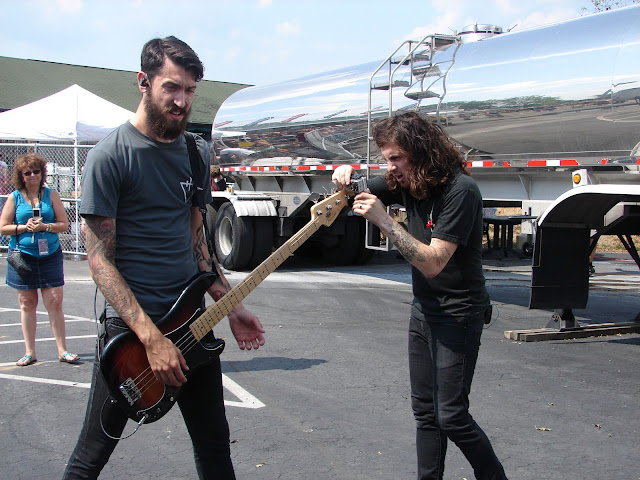 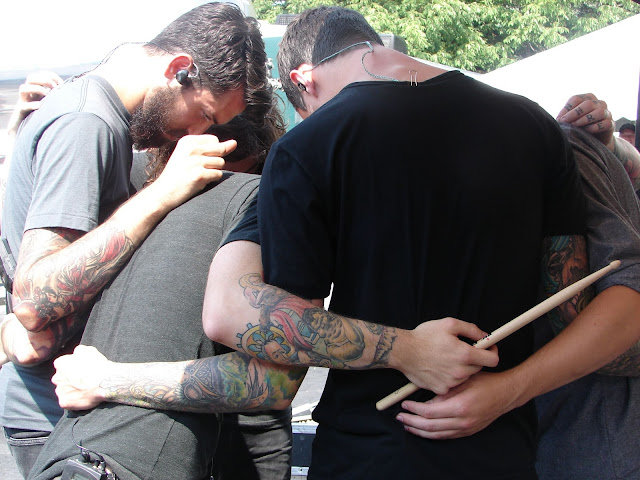 getting psyched up for the show... 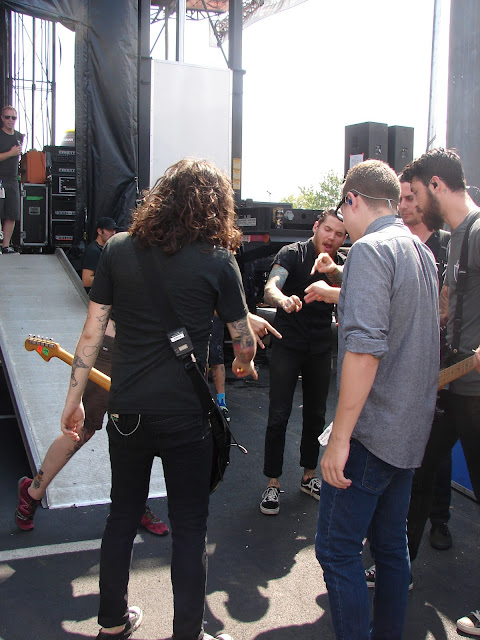 ...then up the ramp to the stage.  I followed right behind.  How cool is that! 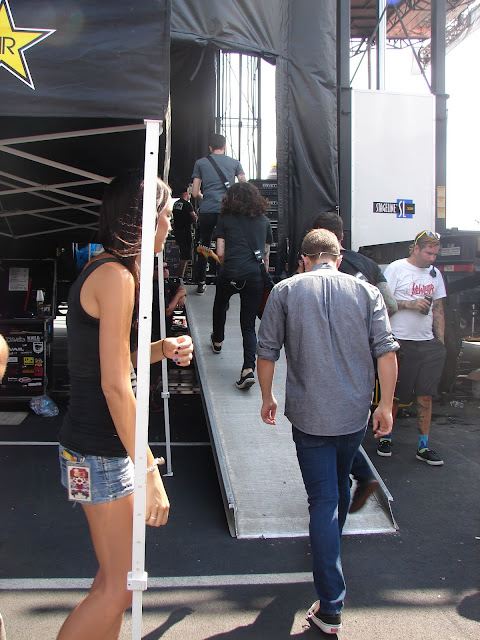 Mike is the lead singer...he is the energizer bunny of metalcore! 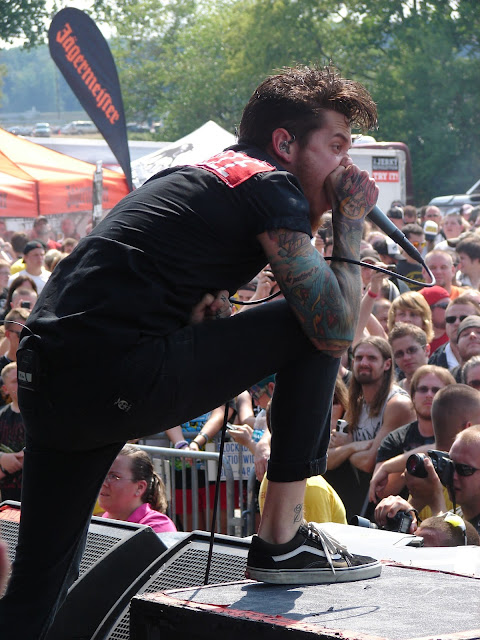 My oldest is on the crew...serious and focused on his job.... 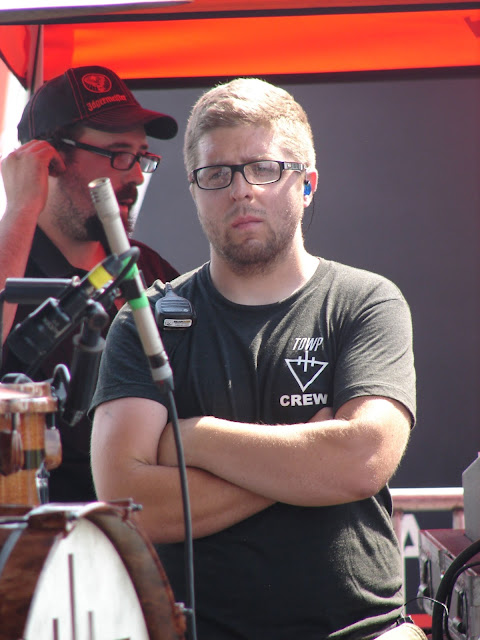 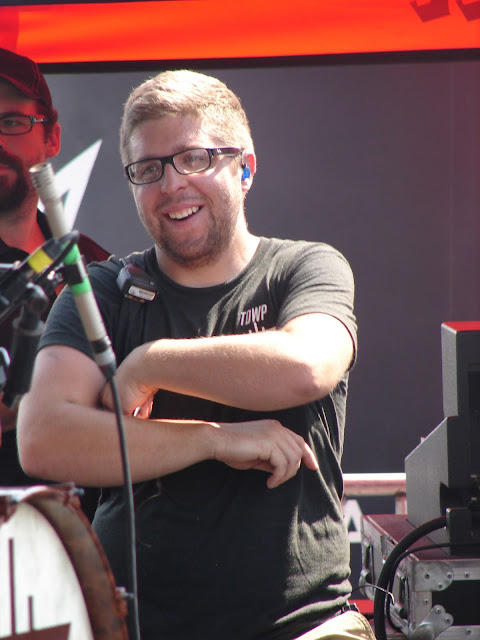 My youngest is the keyboard player. 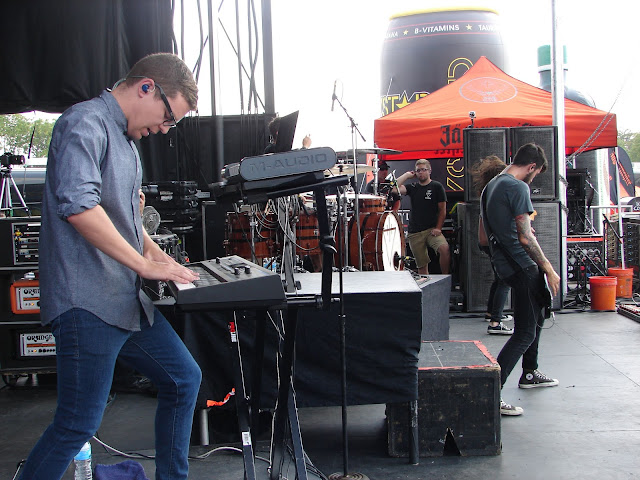 There was LOTS of crowd surfing and the guys in the yellow shirts are security.  Their job is to catch surfers and send them on their way.  And then there was the mosh pit...scary. 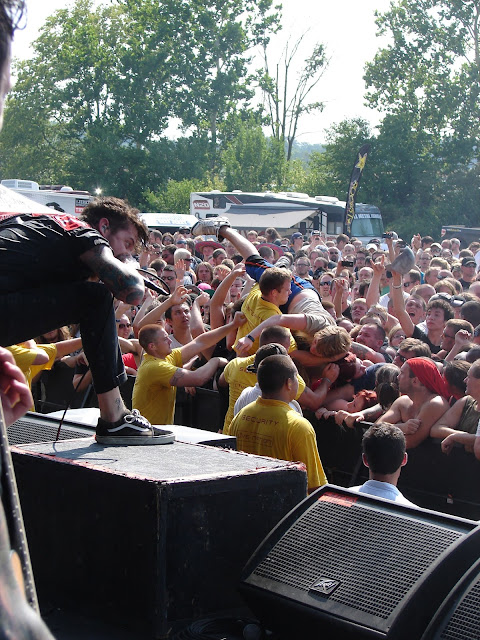 It was about 100 degrees, but you'd never know it from the energy on stage. My youngest is focused too...but in a different way than his brother...more like he's in his musical zone. 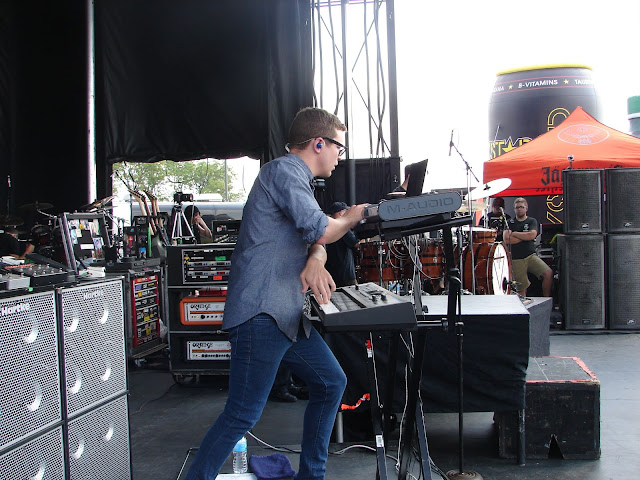 ...amazing to watch him play. 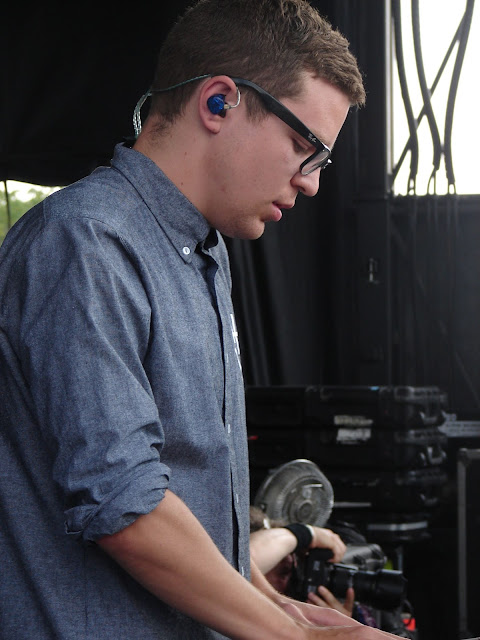 The crowd was pretty entertaining as well. 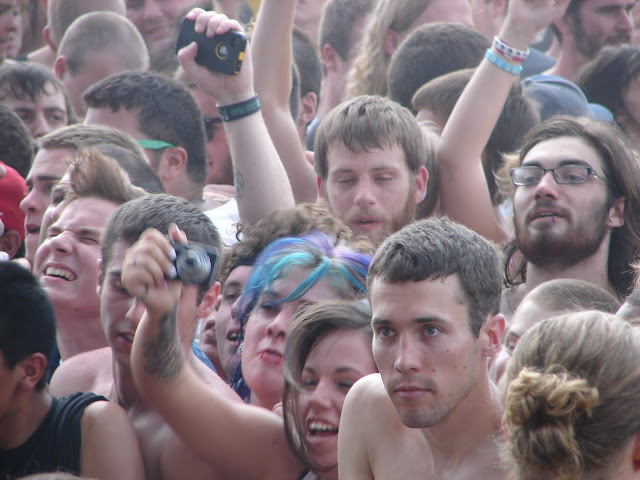 The guys in the band are so much fun to be around..... 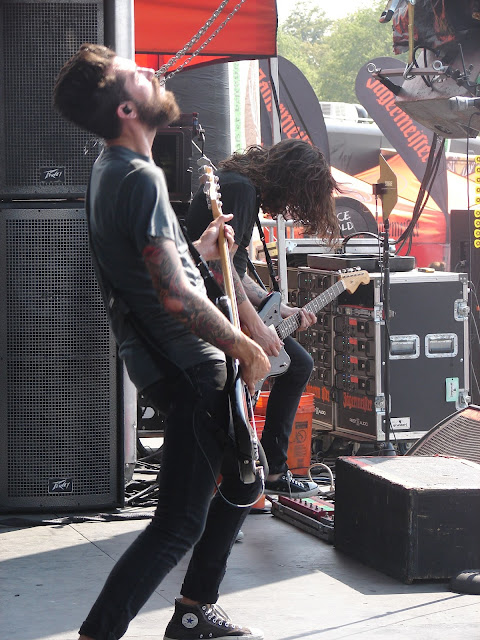 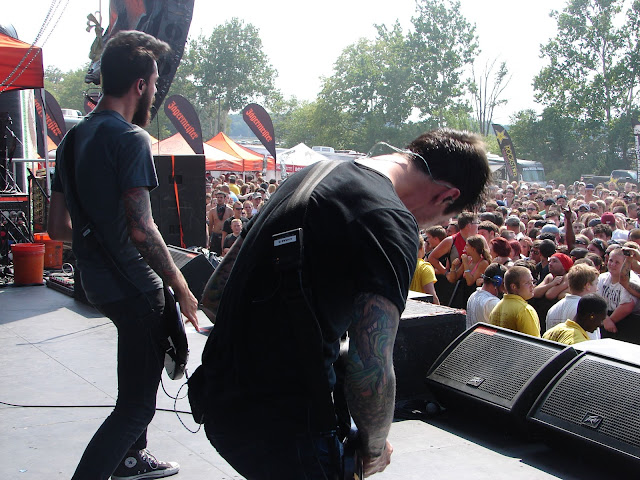 My boys told me I wouldn't be able to hear a thing on stage.  Next time I'll have to be in the front of the house.  Maybe some crowd surfing is in my future? 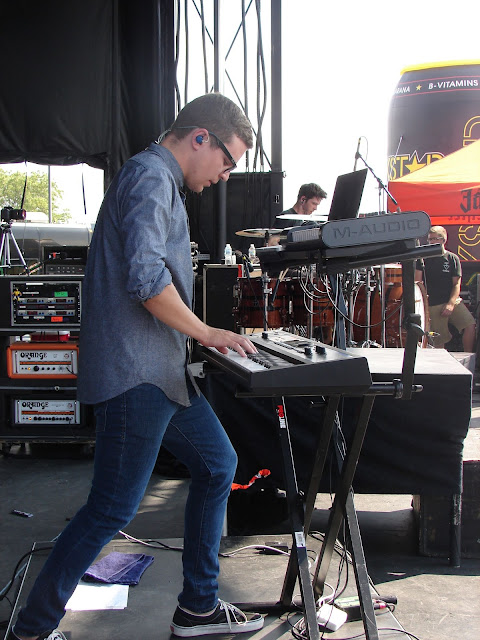 Before I knew it, it was over.  For not being able to hear anything, my ears were ringing for awhile after I left the stage.  I wonder what it would have been like out front.  I guess that's for next time.

pretty amazing...your boys look like they are enjoying themselves! *smile*

That's awesome Jacquie! And don't be too shy about crowd surfing. It's been quite a while, but I recall enjoying it back in my youth!

Wow. Amazing and really something to be proud of!

Very cool... thanks for sharing!

So happy that you got to see them in action. Great memories.

What an experience for you! I'm glad you got to have the experience.

What a cool mom you are, to appreciate them for their talents and colleagues, and keep your cool with the rock stars! Love it.

What great young men! I'm mom to a 9 yr old boy and can only hope he'll be that awesome to me when he's that age. Can totally tell you have a wonderful relationship with them - thanks for sharing!

This is soooo cool! I told my son and he flipped out! He is such a HUGE fan of this band. Thanks for sharing! You should do a signed cd giveaway or something... LOL

What an amazing experience! Thanks for posting all the photo's, it's like being there! (without the loud music of course). And how wonderful for both your sons to be involved!

This is SO COOL! I love this band! I love your pics and it looks like everyone had a great time :)

My son would be so jealous. TDWP is one of his fav bands. His band t-shirt has also been a fav by the worn look of it. I think it's so cool to be such a proud mama. You rock! PS Can't wait to meet you at the Fancy Tiger.

What a treat to see behind the scenes. All that attention to detail! Awesome!

Your post made me laugh today at the end of a really tough day - thank you! It's very cool that you're a proud rock mom - rock on!
a x

WHAT!!!!! Oh my goodness Jacquie- I have been a DWP fan for almost 10 years!!!! This is so exciting to see a quilter who knows that I am talking about!!!

ROCK ON, JACQUIE LOVE! You just made my day!

xoxoxoxo
Jessica from remnants in Austin!

Thanks for sharing the behind the scenes view! Only my kids could get me outside in 100 degree heat :)

That's so very cool of your boys to have you right on stage with them! It looks like they are loving what they do, which I bet makes you proud too! Rock on mom!

how very cool, congrats on being a rockstar mom!! i love me some hardcore and the guys look really amazing, i will check out their sound if i can find it anywhere online.